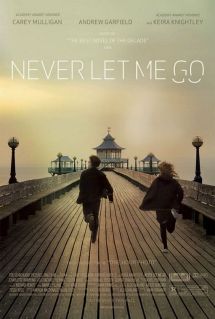 The opening film of this year’s London Film Festival is an adaptation of Kazuo Ishiguro’s SF-tinged novel, directed by Mark Romanek and starring Carey Mulligan, Andrew Garfield and Keira Knightley as Kathy, Tommy and Ruth.  Growing up together in a slightly odd boarding school – initially played by three child actors who look uncannily like their older counterparts, so much so that you half suspect Mulligan has been somehow digitally made younger – the threesome become entwined in a love triangle that plays out against the discovery of their true purpose in life.
The film suffers from the same problem as many literary adaptations: the use of voiceover to fill in chunks of plot.  I don’t doubt that this works in the novel, but with Kathy effectively telling the whole story in flashback, the viewer is immediately at one remove from the events on screen: it gets in the way of emotional involvement.
But that’s a relatively minor problem.  The big one is that at no point was I convinced by the world portrayed in the film.  It’s set in a kind of dystopian alternative England with one foot still in the 1950s, where the use of cloned human beings for enforced organ donation is a fact of everyday life.  How the hell does that work?  We live in a society where the use of stem cells in cancer research is controversial, where abortion stirs passionate debate, where animal rights activists will adopt techniques usually associated with terrorist groups.  Are we really supposed to believe that the general public blithely accept the use of human clones as body banks?  They are out in the community, to some extent: certainly, the hospital staff all seem aware of what’s happening.  Does nobody try to help these people?  Do none of them try to escape?
Other questions I found myself asking: are these organ donations available to all and sundry, or only the wealthy and privileged?  The former would presumably lead to a rise in the number of centenarians, so what’s that done to the pensions crisis?  And if it’s the latter, if the bulk of the country can’t benefit from these medical advances, they’re surely more likely to indulge in moral qualms about what’s being done to the clones.
If I’m being bothered by questions like these while I’m watching the film, then I tend to think something’s wrong.  I’m told by those who have read it that such issues aren’t a problem when reading the book, so maybe Ishiguro makes it work in print in a way that it doesn’t on screen.  As it is, the film has to be regarded as a metaphor, with the central trio standing in for whichever exploited group you prefer: slaves, battery hens, take your pick.  This is a valid approach, and could allow the film to raise questions about the extent to which any of us are controlled and have our freedoms restricted by the state (Kathy’s final voiceover does just this, but too late).  But I think screenwriter Alex Garland tried to make the film work as a convincing portrayal of a fascist – or arguably fascist – state, and it doesn’t.
But if the film is hollow at the core, it does benefit from some terrific work by the cast, notably Mulligan and Garfield.  It’s thanks to their work that the ending does pack a substantial emotional punch.  But it should have been much more powerful; the knowledge of the full evil to which these innocents have been subjected should leave you utterly crushed.  It doesn’t.
In the end, this is a superbly played, good looking and generally well mounted film that is, sadly, a little inert.

The creation of the Facebook website did not sound, when I first heard about it, like a particularly gripping subject for a movie.  But while the technical details may not enthrall, the story of jealousy and betrayal that lies behind it does.
Jesse Eisenberg stars as Dr Sheldon Cooper… oops, I mean Mark Zuckerberg.  In the opening scene, he is dumped by his girlfriend Erica (Rooney Mara) for a combination of arrogance, ambition, and a complete inability to understand why she’s annoyed with him.  It sets up the film’s central irony – that a man with so little in the way of social skills managed to create the world’s biggest social networking site, before finding himself being sued by his one close friend.  That’s Eduardo Saverin (Andrew Garfield), who put up the initial funding for the site and helped write the initial code but ultimately found himself squeezed out.
The Social Network is credited as a David Fincher film; but when watching, it feels far more like an Aaron Sorkin film.  That’s not to take anything away from Fincher’s work, only to acknowledge that Sorkin’s authorial hand can be sensed throughout.  In The West Wing, he showed himself to be one of the few TV writer/producers with a distinctive, even unmistakable dialogue style.  There, his favourite trick was to have characters talking about political matters very quickly, intensely and often wittily in order to avoid boring viewers; here, algorithms and coding are debated in the same manner.  I don’t really understand what algorithms are (and when I say “not really” I mean “not at all”) and when people in the film don’t answer others because they’re coding, you might just as well tell me they’re communing with the matrix for all the sense it makes to me.  But it sounds dramatic.  Earlier in the day I’d seen Wall Street: Money Never Sleeps, which fails utterly to pull off the same trick; whenever the characters started talking about sub-prime, my eyes started to glaze over and I began to ponder more important questions, like what I might have for tea.
As played by Eisenberg, Zuckerberg is something of an enigma. He is variously accused of being an asshole, and of trying to be an asshole; it’s left to the viewer to judge which verdict is closer to the truth. His failure to empathise with others reaches almost levels that appear almost autistic; he is consistently rude and condescending to authority figures; yet he appears to regret the loss of his friendship with Saverin, while it’s suggested that much of his motivation came from a desire to disprove Erica’s assessment of him.  Indeed, many of the characters go round with sizable chips on their shoulders, stemming from their ethnicity, class or perceived (by themselves or others) social status.  Whether these grudges really were behind the multi-million dollar rise of facebook and the subsequent lawsuits, or whether they are dramatic conceits of Sorkin and/or Ben Mezrich (who wrote the book The Accidental Millionaires, on which the screenplay is based) I can only guess.  But I would love to know, just as I would love to know Zuckerberg’s honest opinion of the film.
The film is performed superbly by Eisenberg, Mara (who thankfully shows there’s more to her than dodgy 80s horror rehashes, and bodes well for her upcoming role in the Girl with the Dragon Tattoo remake) and Justin Timberlake, as the unpredictable Napster founder Sean Parker.  Garfield, though excellent as Saverin, does seem a bit too good looking and charismatic to play a nerd who supposedly has trouble getting girls.  Still, that’s Hollywood.  This is definitely one to like.