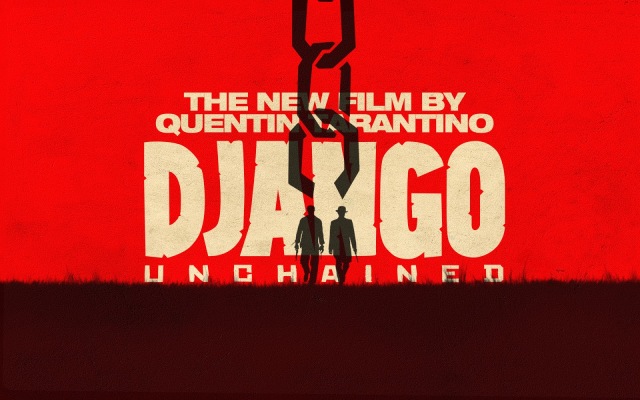 Quentin Tarantino’s latest is another film indebted to earlier pulp fictions, this time the spaghetti western.  As with much of his work, it has moments of brilliance, is very entertaining in large parts, but is too long and let down by its creator’s self-indulgence.

The film would be vastly improved by cropping its running time by a good twenty minutes or so.  There are only a couple of scenes I’d dump completely (which I’ll come to in a minute) but almost every one could easily be trimmed.  Unfortunately Tarantino seems to have difficulty in killing his babies (Inglourious Basterds suffered from the same problem), and at this point, nobody is going to make him.

Django has been controversial for its copious use of what is referred to, in respectable company, as the n-word; I had no objections to it in context, but then being white and British I suppose it doesn’t carry the same kind of baggage for me.  Nor was I concerned about the violence, of which there are two kinds: the violence perpetrated on slaves by sadistic whites, and the OTT blood bath of the climax.  To be fair to Tarantino, scenes showing the first variety are played straight; one could argue they are exploitative, in that they engage our sympathies and set us up to relish the cathartic slaughter at the end, but I think the director was honestly trying to be responsible in their depiction – and may have been deliberately using the film to educate his audience (through, for example, the lecture on phrenology given by Leonardo DiCaprio’s character).  This could conceivably be the first time some viewers will have seen this period of history depicted in such a manner; if that leads them to investigate this particular noxious facet of America’s past, then that’s surely a good thing.

Tarantino’s determination to be seen to be on the side of the angels is also, I suspect, the motivation for one of the scenes I’d happily cut; a comedy sequence showing an inept troupe of Ku Klux Klansmen struggling to see out of their hoods.  It’s funny, and mocking the KKK is generally worth doing, but it adds nothing to the story and would work better as a DVD extra.

The other scene that needs particular trimming comes late in the movie, and features Tarantino himself in an extended cameo.  Nobody really sees Tarantino as a great actor, and while it’s not his worst performance, it’s a major distraction that takes you out of the film – which was starting to try my patience at that point anyway.  He’s also doing an accent (get you, Meryl Streep, I thought).  Possibly this has allowed him to cross ‘work with John Jarrett’ off his bucket list, but I’m afraid that’s not justification enough.  Let’s give credit where it’s due, though: Eli Roth isn’t in it.

What’s great about the film is Christoph Waltz as Dr King Schultz, the German bounty hunter who frees, then befriends the slave Django (Jamie Foxx).  In fact, I found Waltz’s character arc more interesting than that of Django himself.  The title character, initially barely literate, is introduced to the idea of role playing by Schultz, and takes to it with surprising ease; he is also the one who pushes Schultz to face the fact that his own profession has uncomfortable similarities to the slave trade he despises.  The film suffers when Waltz is off screen for too long, another reason why the last half hour drags.  I also enjoyed Leonardo DiCaprio as the repellent plantation owner Calvin Candie, though it’s a big performance that threatens to smother some of the more serious elements.

But the man who by rights would be collecting an Oscar is Samuel L Jackson, whose work as Stephen, Calvin’s house nigger, is simply extraordinary.  Stephen is a vile character, the worst kind of collaborator, who shifts from obsequious slave to paternal mentor to DiCaprio. He made my skin crawl like few other characters in recent cinema.

Is the film it worth seeing?  Well, for all its flaws, it has vividly stayed with me, so I would have to say yes.  As a movie about slavery, many may find it exploitative and tasteless – but I’d far rather see Tarantino’s slavery movie than another asinine tale of nice white folk curing America of racism (yes, The Help, I mean you).  You can’t think of any other American director who could have made this film – you’d struggle to think of any who would dare even try.