Find me on LinkedIn 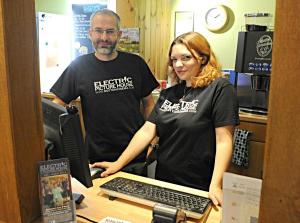 Having been run as a community cinema by a team of volunteers since 2005, the Electric in Wotton was facing closure following a downturn in ticket sales and the retirement of key committee members. I took on the operation of the cinema together with my partner, Sam Osborn. We introduced paid staff alongside the volunteers, increased the number of screenings, and dropped the monthly programme to increase flexibility in programming and reduce expenditure.  The result was a 16% increase in ticket sales in 2014, and the cinema turned a profit for the first time in three years.

As of March 2015, the business is owned by the Electric Picture House Cinema Ltd, a company managed by myself and my wife, Sam.

The Curzon is a single screen independent cinema, owned since 1996 by a registered charity.  As Director, I was responsible for the artistic programme and the day to day operation of the business.  My duties included programming and booking films, marketing and press liaison, and management of the staff.

Working in close collaboration with the Board, I led the cinema through a successful funding bid to the Heritage Lottery Fund that allowed us to transform much of the building, a project that included opening a permanent exhibition and a new lounge bar.  This involved working with a Project Manager, designers, the local community and the HLF in order to agree the details of the work. I also successfully applied for a license to sell alcohol.

The extension to the Curzon’s opening hours meant I had to develop a revised staffing structure.  I created a plan which would allow the Curzon to expand its staffing level without reducing the income of existing staff, and which would leave the organisation in better stead for the future.  I led the recruitment and training of a new team of duty managers, as well as a large number of additional volunteers.  From being a cash only business which opened the doors 30 minutes before film screenings, by 2012 the Curzon was open for an extended period daily, was able to sell advance tickets for all events, and allowed free entry to the exhibition and Curzon Collection of Heritage Cinema Equipment.

The Arc is a multi-artform venue with a dedicated cinema space. I have been programming their films since summer 2013.

I booked the Curzon’s film programme and provided brochure copy, as well as designing flyers for some events and the Curzon Film Club. In addition, I provided a degree of marketing support through the writing of press releases, social media, etc.

I worked with the Picture House in their centenary year, booking films and acting as a marketing consultant.

The blog for Seeking Perfection, the first book on Tremors

Sometimes I write, sometimes I vent. Just for fun.

A cultural meander through Bristol

She doesn't mince her words

Passionate about silent films for over a decade.