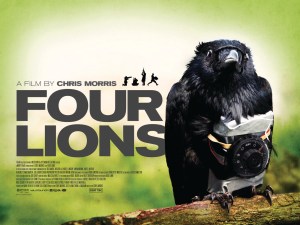 Honestly – you wait ages for a British comedy about crazy Islamists, then two come along (almost) at once. Kind of.
OK, not really. But The Infidel and Four Lions – two comedies with Muslim protagonists, both written by white men more associated with TV comedy – have been released in sufficient proximity to make comparisons inevitable, if arguably unwarranted.
Of the two, The Infidel is the least political. It focuses on the odd friendship between Omid Djalili’s not-very-devout Muslim who learns he is a Jew adopted at birth, and Richard Schiff’s drunken cabbie. Much comedy of embarrassment follows, as Mahmud Nasir (Djalili) attempts to act Jewish, attends a bar mitzvah, and an Islamist protest rally.
His identity crisis offers some decent laughs, though drawn from often quite broad stereotypes. But David Baddiel’s screenplay also throws in an antagonist for our confused hero in the form of Arshad El Masri, a fanatical preacher who espouses his own selective reading of the Koran, and is Mahmud’s prospective father in law.
El Masri is the sort of smiling, but mad, preacher who might have helped radicalise the protagonists of Four Lions. Baddiel is rightly unafraid to mock him – he has a follower with a metal claw in place of one hand, clearly inspired by the tabloids’ favourite panto villain, Abu Hamza. The latter part of the film is driven by the clash between him and Mahmud’s we’re-not-so-different-under-it-all philosophy.
Sadly, the resolution to this clash and the way in which Mahmud triumphs is based on an absurd plot twist that is straight ouot of a TV sitcom of the My Family mould. It doesn’t ring even faintly true for a moment, and lets the film down badly.
Chris Morris’ feature debut Four Lions is much harder edged. It follows in the comedy tradition of a group of apparent friends, bound to each other by some need without necessarily liking each other, who manage to disastrously overcomplicate a simple plan. Other tales of male camaraderie would feature a group of people trying to organise a stag night, or maybe start a business together, or become a bunch of strippers… with hilarious consequences (I’ve always wanted to write that).
The film follows a group of bumbling would-be jihadis as they variously plan a suicide bombing campaign, flunk their training in Afghanistan – a sequence which pays off with a corking gag at the close – and record their suicide videos, ending up only with outtakes. The comedy comes from the fact that they fumble their way through their schemes less like a Spooks-style sleeper cell, and more like the heroes of Dad’s Army. It’s often very funny, but also chilling as the consequences of the group’s fanaticism are illustrated; a mix that the less sharp toothed The Infidel does not attempt.
If the film has a weakness, it’s that their motivations for mass murder are suggested, but left unexplored. Sure, some of them are none too bright and easily led. Barry, the white Islamic convert, is a crazed nihilists looking for a way to channel his hatred of everything. But Omar – the film’s central figure and hero of sorts – must surely have thought about it more deeply. What exactly was the point when this husband and father decided to kill himself, and as many others as possible, and why does his wife support it? (Does she think he won’t actually go through with it?)
Whether Four Lions will result in a storm of Brass Eye style outrage from idiots who can’t cope with the idea of finding humour from suicide bombers remains to be seen (the Daily Mail might still be getting its breath back after it’s fury over Kick Ass). Perhaps Chris Morris will have to go into hiding to escape a fatwa. I hope the film will be widely seen; not only is it good entertainment, it might just make a few possible suicide bombers think twice.