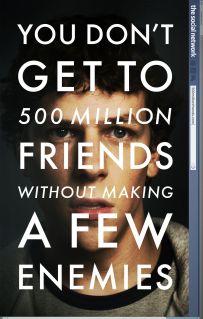 The creation of the Facebook website did not sound, when I first heard about it, like a particularly gripping subject for a movie.  But while the technical details may not enthrall, the story of jealousy and betrayal that lies behind it does.
Jesse Eisenberg stars as Dr Sheldon Cooper… oops, I mean Mark Zuckerberg.  In the opening scene, he is dumped by his girlfriend Erica (Rooney Mara) for a combination of arrogance, ambition, and a complete inability to understand why she’s annoyed with him.  It sets up the film’s central irony – that a man with so little in the way of social skills managed to create the world’s biggest social networking site, before finding himself being sued by his one close friend.  That’s Eduardo Saverin (Andrew Garfield), who put up the initial funding for the site and helped write the initial code but ultimately found himself squeezed out.
The Social Network is credited as a David Fincher film; but when watching, it feels far more like an Aaron Sorkin film.  That’s not to take anything away from Fincher’s work, only to acknowledge that Sorkin’s authorial hand can be sensed throughout.  In The West Wing, he showed himself to be one of the few TV writer/producers with a distinctive, even unmistakable dialogue style.  There, his favourite trick was to have characters talking about political matters very quickly, intensely and often wittily in order to avoid boring viewers; here, algorithms and coding are debated in the same manner.  I don’t really understand what algorithms are (and when I say “not really” I mean “not at all”) and when people in the film don’t answer others because they’re coding, you might just as well tell me they’re communing with the matrix for all the sense it makes to me.  But it sounds dramatic.  Earlier in the day I’d seen Wall Street: Money Never Sleeps, which fails utterly to pull off the same trick; whenever the characters started talking about sub-prime, my eyes started to glaze over and I began to ponder more important questions, like what I might have for tea.
As played by Eisenberg, Zuckerberg is something of an enigma. He is variously accused of being an asshole, and of trying to be an asshole; it’s left to the viewer to judge which verdict is closer to the truth. His failure to empathise with others reaches almost levels that appear almost autistic; he is consistently rude and condescending to authority figures; yet he appears to regret the loss of his friendship with Saverin, while it’s suggested that much of his motivation came from a desire to disprove Erica’s assessment of him.  Indeed, many of the characters go round with sizable chips on their shoulders, stemming from their ethnicity, class or perceived (by themselves or others) social status.  Whether these grudges really were behind the multi-million dollar rise of facebook and the subsequent lawsuits, or whether they are dramatic conceits of Sorkin and/or Ben Mezrich (who wrote the book The Accidental Millionaires, on which the screenplay is based) I can only guess.  But I would love to know, just as I would love to know Zuckerberg’s honest opinion of the film.
The film is performed superbly by Eisenberg, Mara (who thankfully shows there’s more to her than dodgy 80s horror rehashes, and bodes well for her upcoming role in the Girl with the Dragon Tattoo remake) and Justin Timberlake, as the unpredictable Napster founder Sean Parker.  Garfield, though excellent as Saverin, does seem a bit too good looking and charismatic to play a nerd who supposedly has trouble getting girls.  Still, that’s Hollywood.  This is definitely one to like.
Advertisement