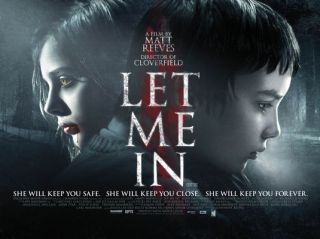 We already have one adaptation of John Ajvide Lindqvist’s novel Let the Right One In, and those who have seen it generally agree it’s a pretty good one.  However, it has the bad luck not to be in English, so here comes Hollywood to provide us with a dumber remake.
Except it’s not dumb.  It’s a very impressive film that manages to be loyal to both the source novel and the film, while adding a few extra shades of its own.
It’s interesting to see that this is the first cinema release from the freshly revived Hammer Films (they also have a new logo that uses old poster artwork, in a manner reminiscent of the Marvel Studios one).  Hammer weren’t shy of remakes and adaptations in their golden years, though then the choices were usually familiar literary properties like Dracula and Frankenstein (OK, and On the Buses) rather than a recent arthouse hit.  But they’ve made a wise move in looking beyond their back catalogue.
Lonely, bullied 12 year old Oscar seems to have made a new friend when a girl calls Abby moves in next door with a man who he assumes to be her father.  But after a murder or two, Oscar comes to realise that Abby is not actually 12 – or rather, has been 12 for a very long time – and needs a fresh supply of blood to live.
Matt Reeve’s film has the taste to stay faithful to the visual and narrative style of Tomas Alfredson’s Swedish version; as with Gore Verbinski’s similarly close remake of The Ring, some shots are almost identical.  He has also cast two excellent young actors, Kodi Smit-McPhee and Chloe Moretz in the lead roles, with the slightly more experienced Richard Jenkins providing support (his scenes with Moretz are tender and disturbing at the same time).  As with The Ring, though, we do have to tolerate a few shots done up with unnecessary effects; Abby’s vampire attacks are sped up and enhanced with CGI, and look cartoony rather than horrific.  (She also leaps on one victim in view of a witness who she must have been able to spot, which is a bit of a strange decision).  But on the other hand, we lose the cat attack scene that was the original’s least convincing moment.
There are other changes, inevitably.  The question about Abby/Eli’s gender has been given the chop (so to speak…) – not a loss newcomers would notice, though it does mean Abby’s question, “Would you like me if I wasn’t a girl”, loses a layer of meaning.  But the biggest change comes in one small scene where Oscar finds photos of Abby with a young Father.  A tiny moment, but it radically alters the Father’s character and, by implication, Abby’s.  The Swedish film is not explicit, but my reading was that the ‘father’, Hakan, was a paedophile recruited by Eli to hunt for her and provide protection (this was confirmed by the novel, which I read subsequently).  Making him a childhood friend of Abby’s suggests she may be consciously grooming Oscar as a replacement.  I can’t see much sign of this in Moretz’s performance – she seems to be playing the character as written in the original version – so I’d be interested to know why Reeves made this change, and if he discussed its implication with his actors.  It actually makes the ending of the film far bleaker than that of the original.
Let Me In may not escape the long shadow cast by its predecessors, but it is nevertheless the best kind of remake: one which stays respectful to the source material while standing firmly on its own.
Advertisement