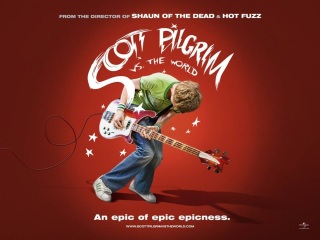 Most comic book adaptations require the viewer to buy into a fantasy world. Edgar Wright’s Scott Pilgrim vs the World asks us to accept two. First, there’s the cooler-than-cool muso slacker lifestyle of Scott and his friends – OK, maybe not technically a fantasy in the usual sense of the word, though from where I’m sitting it might as well be. Then there’s the way the story is told through a series of OTT fights, fantasy scenes and magic realism, as Scott faces various romantic challenges as though they were levels of a video game.

If you aren’t willing to accept either level of fantasy, then Scott Pilgrim will be something of a chore. If you can, it’s great fun.

Scott Pilgrim shares a flat with his gay friend Wallace Wells, plays in a band called Sex Bob-omb, and is still only just recovering from a traumatic dumping a year previously. Then he meets Ramona Flowers (Mary Elizabeth Winstead) the girl of his dreams (literally; he’s already dreamt about her, thanks to Ramona taking a handy short cut through his head). Just as their relationship is starting to blossom, Scott learns that Ramona has some major baggage in the form of 7 evil exes, who Scott must fight and defeat in order to win her hand.

I wasn’t sure about Michael Cera as Scott at first. We’re told that he’s really cool and awesome, but as Cera plays him as nervy and uncertain as every other character he’s played, it’s hard to judge if we’re meant to take this seriously. His portrayal works better once Ramona enters the picture and we see Scott desperate to impress her. Other cast members hit the right note of droll irony and/or broad comedy as required. Favourites include Chris Evans as a star of knucklehead Hollywood action movies, Kieran Culkin (who seems to be turning into Alan Tudyk, rather surprisingly) as Wallace and Alison Pill as Sex Bob-omb drummer Kim Pine, who looks as though she was drawn by a comic book artist.

The fact that a new partner may have weightier baggage than initially apparent is something most people would be able to relate to and you could, if you wished, see the fantasy battles of the film as metaphors: Scott’s image of his struggle to live up to Ramona’s memory of her former partners, filtered through his reference points of video games and music. But that would mean accepting the whole film as being told by someone who could be a very unreliable narrator indeed, so it’s probably best to just relax and enjoy the visual overload. The laughs started early at the screening I attended, with the videogame style rendering of the universal logo; other crowd pleasers included the explanation for Evil Ex Brandon Routh’s superpowers.

Scott Pilgrim is certainly not the most emotionally satisfying film about fighting for your one true love (I didn’t much care which girl Scott ended up with, if any) but it’s a fun, lively and entertaining couple of hours.