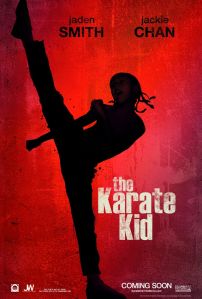 Hollywood will remake anything that has a recognisable title, be it a book, a TV show or a movie – ideally one that people who liked the original will now take their kids to. Hence the new version of The Karate Kid – which doesn’t have any karate in it, though the more honest title of The King Fu Kid was presumably passed for lacking the necessary brand recognition. Still, at least this time he is an actual kid rather than a twentysomething faking it.
It also has an advantage in that the original film is not exactly a deathless classic (I expect – I haven’t seen it, though I did see the sequel), which leads to safely lowered expectations. Luckily, the new version is a very watchable film.
Jaden Smith, who seems to have inherited his dad’s charm, plays 12-year-old Dre, who is obliged to move to China with his mom. Soon he is having his ass kicked on a daily basis by the local bullies, who have been studying kung fu under evil bastard teacher Master Li (Rongguang Yu) who doesn’t have much truck with all that crap about fair play and showing mercy to your opponents. Luckily, the reclusive building handyman Mr Han (Jackie Chan) is a bit nifty at kung fu himself, and agrees to take Dre on as a pupil.
The only real problem with the film is that it’s very long – about 2 ¼ hours, which is a hell of a time for a film when you already know the ending going in (you may also be tempted to start humming that song about montages from Team America at certain points). It certainly didn’t have to be this long; for a start, I could have happily lived without quite so much scenery (sure, if you’re filming in China you don’t want to waste it, but the trip to the Forbidden City for one adds nothing to the film at all). A bit less puppy love with aspiring violinist Meiying would also have been an improvement.
The film’s highpoints come between Smith and Chan; their chemistry keeps the film watchable during potential longeurs, with the most exciting moment being the scene where Dre realises the repetitive task that has been occupying him for days – taking his jacket on and off – has in fact been teaching him kung fu moves. Chan gets a bit of backstory about his family, though some that you might have expected never emerges (his meeting with Master Li seems to be played as though the two have a history together, but this is never expanded on).
If they could have managed to hold the film at under two hours, I would have no complaints at all. As it is, The Karate Kid is as good a film about children learning to kick people in the head as you could really wish for.

1 thought on “The Karate Kid”