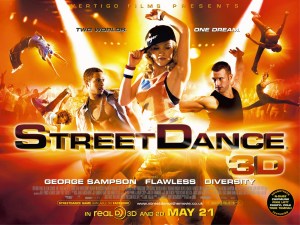 Sometimes, a film like Robin Hood just looks too bloated and pompous, too long and dull. Sometimes you just want something light and frothy. Preferably in 3D. Which is when you want something like StreetDance.

StreetDance is about a crew of street dancers, whose leader Jay takes time out five weeks before the UK street dancing championships – because, like, work and uni and that are getting really heavy, yeah? His roles of choreographer and deliverer of inspiring motivational speeches are left to his girlfriend Carly (Nichola Burley) who, unable to afford rehearsal space, makes a deal with ballet school tutor Charlotte Rampling; she will have unlimited studio time in return for taking some of the ballet students into her crew.

Well, you think, I don’t see that working out. Ballet and streetdance mixing? Why, they’re worlds apart! It’s not like they’re going to learn valuable lessons from each other, mix their disparate styles in ways that tear up the rulebooks and come up with a winning routine in just five weeks, is it? (Spoiler alert: actually, it is.)

Nobody ever went to a film like this for the screenplay, and the dialogue here barely reaches the level of functional. Casting for dance skills over acting ability means you have to expect some wooden turns, and indeed you get them. More disappointingly, Nicola Burley (who can be good – just watch Kicks for the evidence) seems to have been dragged down to the same level. In one early scene she manages to make the line, “Why didn’t you tell me? I looked completely stupid,” sound as though it was written as “Why didn’t you tell me I looked completely stupid?”. As for her various morale-raising speeches to her crew, she doesn’t sound as though she believes a word of it.

But the dancing is what counts, and StreetDance offers plenty of it. Various people from TV talent shows crop up; of the ones I’d heard of, Diversity only get one scene, but George Sampson pops in and out throughout before his big solo near the climax. There were probably others.

I’m something of a 3D agnostic; it’s fun for a bit, but after a while I stop noticing it (even in Avatar) – which makes me wonder what the point is. Still, if any film ought to benefit from 3D it’s this one, and the technique is indeed used well throughout. It’s quite consciously designed to show off the moves, throwing in some funky bullet time moments, though some of the overhead shots make people appear freakishly tall.

You can’t pretend StreetDance is a good film, but it delivers what it says on the tin, and I didn’t look at my watch once. Bet that wouldn’t have been true of Robin Hood.